A Change in the Wording of the Second Principle, Stimulated by a Rereading of “Tibetan Yoga and Secret Doctrines” by W.Y. Evans-Wentz

Spiritual horseshit, in our era, is served up in many disguises, among which we may distinguish several major varieties, such as the weak-minded California diarrheic (productive of such titles as “The Sun People’s Cardboard Pyramid and Earth Crafts Handbook”), the paranoid Pythagorean (Enroll now—in Dr. Zoroaster’s scientific course in Astral Projection”), and so forth, but perhaps the most dangerous of them all, and the one which supplies the rest of them with their raw material, so to speak, is a tradition we might call the constipated idiot-savant anthropological scholarly, the modern examples of which stretch from the works of W.Y. Evans-Wentz, M.A., D. Lit, D. Sc., Jesus College, Oxford, which were first published in the nineteen thirties, to such familiar current productions as the “Don Juan” books of Carlos Castaneda, a product of the anthropology department of the University of California, L.A..

A close reading of the works of Evans-Wentz is certain to produce in the mind of any reader possessed of elementary common sense, a grasp of the basic rules of scientific evidence, or an appreciation of the simplest distinctions made in philosophic thought (Eastern or Western) an uneasy feeling that, when it comes to anthropology, not even the greatest universities in the world can be trusted not to place the credentials of the learned in the hands of deluded and credulous simpletons.

As an illustration of the type of thought which animates the entire oeuvre of this incredible idiot savant, let us turn to his Tibetan Yoga and Secret Doctrines (Oxford University Press, 1958), a work one will find alike on the kitchen tables of New Mexico hippy communes and on the reading lists of courses offered by the Philosophy and Religion departments of our most prestigious universities, where, in most cases, it is treated with all the solemn seriousness granted to genuine works of scholarship on the same subjects.

Aside from its imitations, there is nothing existent to which one can compare this book to convey a general picture of its contents, but the imagination may supply what literature excludes: Let us say that a thousand years from now a Tibetan anthropologist journeyed to the decayed continent of America and there interviewed a few bookishly religious but unlearned hermits who introduced him to the remnants of their ancestral libraries, among the books of which the anthropologist discovered the works of Thoreau and Emerson, as well as those of Joseph Smith, Mary Baker Eddy, Norman Vincent Peale and Billy Graham, and that the anthropologist, who himself would not for one moment confuse the thought of Nagarjuna with the ignorant fantasies of some hack priest simply because they both were “Buddhists”, proceeded to mix all of the American books he found together under the general heading of “Protestantism” and to explain the startling product of his discovery in terms which implied that the thought of, say, Thoreau was simply a more refined version of the thought of, say, Norman Vincent Peale, but in no way contradictory or separate, and that if one practiced what, say, Billy Graham preached, one would thereby become an Emerson.

The most popular versions of eastern philosophy and religion are founded on this stupid error, and the resultant mass of secondary drivel which has been produced by Evans-Wentz and his imitators to explain the logical gaps and contradictions which glare on every page, through such familiar but goofy concepts as the dynastic inheritance of abstract qualities and the multiplication of all kinds of super-mundane agencies and mechanistic operations, in which literary analogies are reified and the physiological side-effects of psychological techniques are consistently confused with the original objectives of the techniques, is so dense and tangled that it is almost impossible to discern, in the midst of all this rubbish, the few sound and useful methods and ideas which are also present.

That Evans-Wentz, however much he knows about Buddhism, (in the same sense that Einstein’s stenographer and even his dog knew a great deal about their master), understands not even the first elementary distinction of the doctrine from the supernaturalist cant against which it was first propounded, is made clear in his extraordinary preface to the second edition of Tibetan Yoga and Secret Doctrines (Oxford University Press, 1958) in which he asserts, “Were the Heat Yoga to be taught universally in all the schools and to become a world-wide practice, there would be no need for central heating in the dwellings of men, not even in Alaska and Siberia, or throughout the arctic and antarctic regions.” He goes on to say that such education would also make us “transcendent over gravitation, there would be no need of motor vehicles and airplanes, nor of bridges and boats.” These happy eventualities are founded, in Evans-Wentz’s view, on the following philosophic ideas:

“By Mind the Cosmos was shaped. By Mind the Cosmos is sustained in space. By indomitable control of his mind a supreme master of yoga can control all mundane conditionality; he can make, or bring into visible manifestation from the unmanifested, all the things that men can make, without wearisome tools and clamorous and noisome factories.”

Here is another summary of Evans-Wentz’s notion of what is meant by “Buddhism”: (page 13)

“On Earth, as in a University granting many degrees (aha!), man shall continue to matriculate at birth and enjoy the long vacations afforded by death, as he passes on from lower to higher degrees of attainment until, endowed with the Supreme Degree of Buddhahood, he quits Earth’s Halls of Learning, prepared to perform his duties in the guidance and government of the Cosmic Whole, of which, in virtue of evolutionary growth in Right Knowledge, he has become a spiritually conscious part, and Enlightened One.”

(“Aha!” and italics are mine. The key word is probably “part”, which demonstrates the relentless dualism.) Such supernaturalist delusionary vanity is, of course, exactly what Buddha (and his intelligent followers, such as Nagarjuna) found so obnoxious in traditional Brahmanism. What we have here is an exact parallel to the present day Christians who, in almost every respect, formally contradict everything said by Jesus Christ. Although they read his words, they cannot seem to hear them. “Call no man father except your father who is in Heaven”. Fine—let us be sure to call our priests “father”. And where is this heaven? Why, “…the kingdom of God is within you” (Luke 17,21). Oh. In that case, let us be sure to burn at the stake, for heresy, anyone who maintains that such is the case. There is no element in Roman Catholic doctrine which does not have this insane character (Protestantism, in general, is not quite so bad) of contradicting Jesus Christ. Exactly the same is true of the Buddhism which is practiced by the ignorant masses of Asia, and it is this ignorant, superstitious anti-buddhist Buddhism which, in the West, thanks to the likes of Evans-Wentz, Castaneda and Baba Ram Dass, is offered to the average hippy kid as a substitute for the supernaturalism of his parents and grandparents — in consequence of which intellectual sleight of hand, he finds himself, despite the perfectly genuine insights he has momentarily experienced thanks to LSD, functionally right back where he started, wondering what he is doing wrong. What other explanation can there be for his inability to materialize a Cadillac Eldorado Convertible (without the intervention of a noisome factory) other than some secret blot on his soul (or his “microcosmic representation,” if he wants to avoid, as Evans-Wentz does, a too obvious contradiction of the Buddhist scripture)? What he needs, obviously, is more indomitable control over his mind…but, what is it, he will then ask, that is the subject if his mind is the object? The correct Buddhist answer is that the entire duality is delusional and false, but, of course, the people who brought up the idea in the first place (the advocates of purification and indomitable control) are not likely to give that answer, and they do not give that answer, although, somehow, by some insane break in the continuity of thought, they feel free, as Evans-Wentz does, to quote Buddha and Nagarjuna giving exactly that answer in the same works in which they give entirely contradictory alternative answers and pseudo-scientific mumbles about vague microcosms and whatnot.

When confronted by trashy mechanistic occultism such as this in the post-psychedelic systems of such as Leary, Castaneda, and Ram Dass, I must confess to feelings of futility. What’s the use, I ask myself—but then I remember that there never was any use. The situation is hopeless, so relax and enjoy it. Nevertheless, I have concluded that former impressionistic, artistic, and poetic usages which I formerly permitted myself in the mistaken belief that LSD would automatically get rid of all these paranoid reifications (at least among the intellectuals) can no longer be maintained.

I will no longer use terms like “God” or “soul,” because I have come to feel the necessity of explaining with great care, every time I do so, that I don’t mean any thing or entity external to myself, but just categories of impressions or ideas, and it is a drag to constantly explain this. In keeping with this resolution, I am changing the principles of the church as follows:

Principle two will now read “The psychedelic substances, such as LSD, are sacraments, in that they encourage Enlightenment, which is the realization that life is a dream, and that the externality of relations is an illusion.”

Everything else remains the same.

I am encouraged to make this change by the increasingly sophisticated character of the membership, as compared to former days, and by the same considerations which led to my excommunication of Tim. If we don’t stand for clarity, who will? The woods are full of little Evans-Wentzes, ready to seize on any loose terminology to justify their paranoid excesses and drag others down with them into the infernal regions…and there I go again. Obviously, I’m not going to give up a nice turn of phrase when I’m just shooting the shit about Fazzm and McPozzm matters but when we are talking philosophy I think we should remember that loose lips sink ships….

Snazzm: Concepts which require only one delusional assumption, that of internal relations. Consciousness opposed to repression.

Fazzm: Concepts which require the delusion of multiplicity—plural minds, my mind and your mind. Myth. Drama. Poetry. Psychoanalysis.

McPozzm: Concepts which require the delusion of externality, the space-time continuum, mechanism, matter. Causation and randomness.

(My paper on the zzms is available from the Church.) 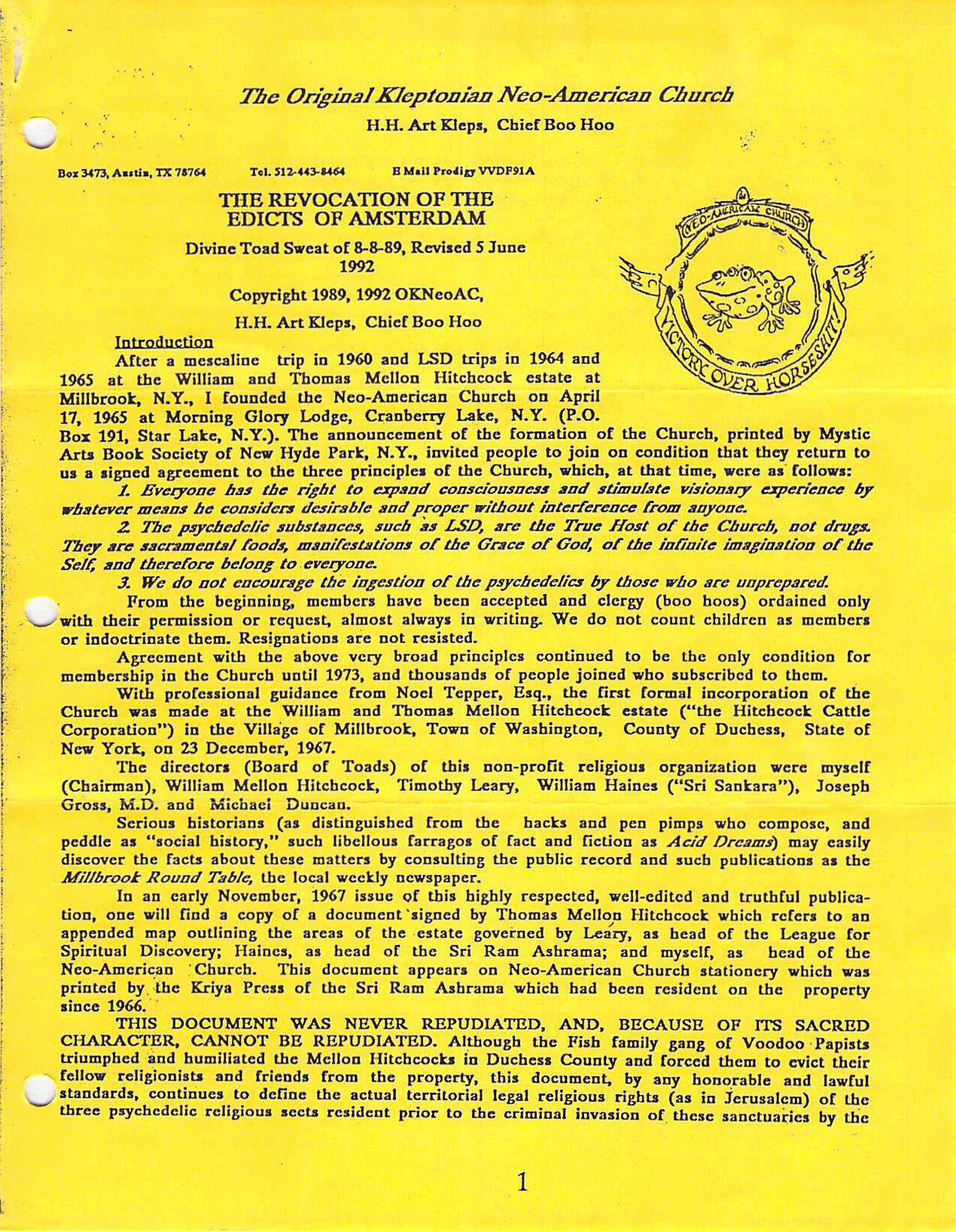 A Change in the Wording of the Second Principle, Stimulated by a Rereading of “Tibetan Yoga and Secret Doctrines” by W.Y. Evans-Wentz
Art Kleps
December 25, 1973
Vermont